Well, well, well.. Getting lazier about the updates, aren't we? Its been few weeks. I hope we can remember everything that has happened. Let's see...

Riot Zine wrote about us, and said the following:

"Flint. Imagine receiving a hard flint flake straight into your face at high speed. This is the feeling with which I feel like describing listening to this record." (Except they said it in Italian)

Our vocalist, Scatter, was a guest on TeenSet Radio on WAYO 104.3 FM in Rochester NY. He was the first guest on this episode, if you want to listen to him complain about how bad the air is in Salt Lake City, and say vague/confusing things about whether the band is mormon or not.

Scatter was also interviewed on The Vacant Podcast by the singer of The Absent Idols about life, the death of the joy of discovery, and other junk.

The whole band got interviewed by Yelloi! Press from Germany, and the interview will be in the next issue of their zine.

We received airplay on:
WBNY 91.3 FM in Buffalo NY,
WMCO 90.7 FM in New Concord OH,
WMCX 88.9 FM in New Jersey,
WMBR 88.1 FM in Cambridge MA,
and on Punkrockers-Radio in Düsseldorf Germany,
and episode #103 of Look What the Kat Dragged In on TheXStream.net.

Punk Rock Demonstration also played us on a few episodes, which we definitely appreciate!

Forever Outsiders is selling a new Usurpers "The World Today" t-shirt. They have alot of other cool shirts also.

Dead Rockers in Long Beach is now carrying our vinyl. They carry alot of other interesting punk stuff, as well.

People in Utah started noticing we exist, and bought a few records and stuff. That was cool.

Oh yeah, and Spotify put us back up for some reason.

Hello, friends. It's been almost a whole week since we last posted an update here.

We got our first coverage in Italian! This takes the form of a small review in the Pinball Wizard blog. If you don't understand Italian (which we completely do), one of the warnings they provide is that our album "is certainly not one of those that is listened to while sipping a cognac in front of the fireplace".

While our vocalist, Scatter, has been known to enjoy a cognac from time-to-time, he does agree that our music may not be best suited for those with a sensitive palate.

We expect to have news soon about availability of our album on cassette in Russia; possibly next month.

Scatter (our vocalist) is a guest on the new episode of SLC Punkcast. So, if you want to hear our vocalist answer a bunch of questions about our band, and say random stuff that nobody asked about, give it a listen.

Do you want a sticker? Just ask us for a sticker. We will then mail you a sticker. Easy.

Also, give a listen to Teenset Radio on WAYO 104.3 FM. The host, Will Carroll, is the publisher of a great zine called National Teenset Outsider and spins 45s at the Teenset 45 Party in Rochester, NY. This guy has also impressed us this year with some other things that we're not going to mention here. Let's just say this guy is legit, and leave it at that, capisce?

We got played on The Punk Bunker on Elastic FM in the UK, which was really cool. And we also got played again on Punk Rock Demonstration. If you play us on your podcast or radio show, let us know, and we'll post about it on here.

We also made a new instagram, because we're not going to let the bastards grind us down. (They deleted us last month because we said something to @realDonaldTrump that wasn't very nice. You know, community standards and other forms of censorship, etc etc).

Meanwhile, Twitter seems to let us make the same helpful suggestions to Trump without feeling the need to censor us.

Check out the new band Night of Rage from Moscow. We like them a lot. You might also like them. They have released a single, and they are working on an album.

We got kicked off instagram for suggesting to @realDonaldTrump that he retreat to his bunker (and kill himself like Hitler did).

We've taken advantage of all of the time we are saving by not being on instagram anymore to update our merch page.

Some people sent us some emails. That was cool. You can also email us and say hi, if you want to be cool. Or you can be super cool and send us a letter. We like letters. Our contact info is here.

We hope you are enjoying the apocalypse as much as we are.

Our album got reviewed recently in Maximum Rocknroll and Razorcake.

Maximum Rocknroll described us as having a "socially conscious UK82 style and strong DIY spirit" and "a cross between latter-day EXPLOITED and something that would be at home on the Pogo Attack comp of yore", which we take as a good thing.

Razorcake's review described us as "a mix between modern street punk and the sly melodicism of early Orange County hardcore", which I guess we can live with.

We also got reviewed in Ear of Corn, who used phrases like "excellent aggressive hardcore" and "killer punk fury", and said we have "great socio-political lyrics". You can read all of the nice things they said here. And if you want to obtain this zine, you can do so by writing to: Food, PO Box 6061, Saginaw, MI 48608.

Another review was written by Baby Detroit Zine. They said tons of nice stuff about our record, like "a breath of fresh air", and that we "maintain a strong, unified sound and write excellent lyrics", which was really nice to read!

We recently got airplay on:
the Equalizing X-Distort show on CIUT 89.5 FM in Toronto, Canada,
Not The Punk Rock Show on Phoenix 96.7 FM in the UK,
the Max Volume / Flex Your Head show on the Boston Rock Radio Network and Radio WIGWAM in the UK,
The Kat Monroe Show on XStream.net Radio,
and The Lisa PunkrPrincess Whatever Show on Whatever 68 Radio.

We have also been getting regular play on Punk Rock Demonstration, and we want to give sincere thanks to Jack for featuring us so often.

Punk & Oi Worldwide made a cool video about our record:

Finally, we want to suggest you check out a couple of bands, which happen to both be based in Las Vegas: Gob Patrol, who have a new record out, and Soldiers of Destruction, originally formed in the UK in 1981, but now reformed with a new line-up in Las Vegas.

Ok, ok.. Its been pretty long since we've posted an update on here. But, you know, well.. the apocalypse is happening and stuff.

But, you already know that, and the last thing on your mind is probably what some completely unknown punk rock band is doing. Regardless, some stuff has been happening with us, and I'm gonna write about it here, just-in-case some human somewhere looks at this page sometimes.

First of all, we got featured on SLC Punkcast recently, and they said a bunch of nice stuff about us, so that was pretty cool! We ain't done much, yet, to promote our first record, so its pretty cool when someone like that notices us!

Secondly, our vinyl finally arrived! So, we have actual tangible stuff you can get from us, now. We also have cassette tapes and CDs, if you want it in a more portable-yet-permanent format.

The company that pressed our vinyl sent us some cool photos of it. Here's what the full package looks like: 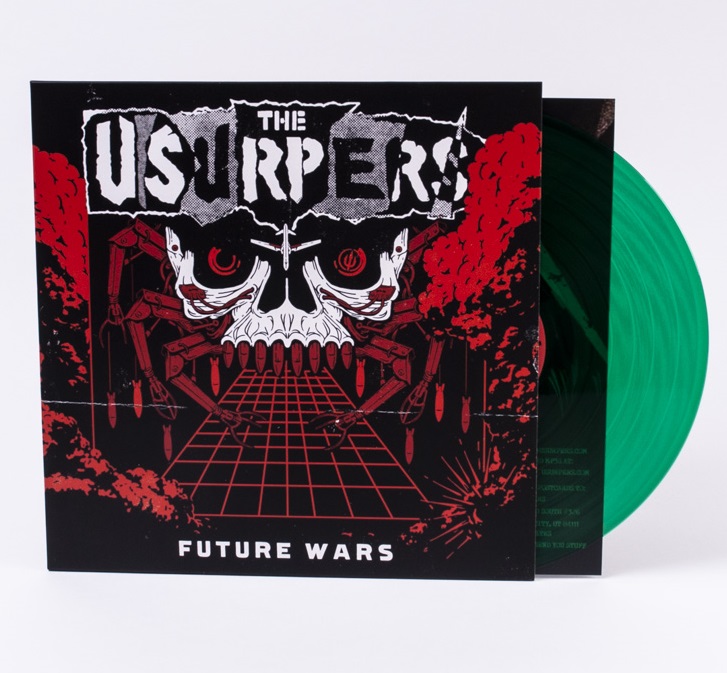 The vinyl wasn't cheap to get done, so we have only made 500 of these. And we're selling them pretty damn cheap. If you buy a copy, that will give us some money we can put towards releasing our next record.

Also, completely unrelated note..
There's a great record that came out last year, which you may have overlooked, by a band called Alternate Action, from Vancouver. The record is called "Violent Crime", and was produced by Ryan Shepard.

We don't know these guys or anything. It's just a great fucking record, and much respect to everyone involved in making it.

I'll try to do a better job of keeping everyone updated a little more frequently.

There's now cassette tape covers and CD covers that you can print yourself.

You can burn your own CD or make your own tape from the MP3 files on the download page. Then print your own covers using the PDF files posted on the same page.

You can do this instead of paying us for a tape or CD, and its faster than mail order.

There's black and white versions, and full color versions. Use whichever is best for the printer you've got.

There's a bunch of new stencils posted on the site. These are PDF files that you can print out, and then cut out the black parts to make stencils you can use for spray painting on jackets, shirts, walls, whatever..

There's also now some graphic design files that might be useful to you if you know how to use Photoshop or Illustrator or shit like that. You can use these to make Usurpers stickers or shirts or something and get rich selling them without paying us a commission or anything. (Seriously, if you want to do it for some reason, be our guest.) You could also use these to make a flyer for a show you've booked us on, or something.

We also are trying to get a gig in Logan, Utah on April 17th, but we've yet to get confirmation on that date, yet.

And we want to play somewhere in March. Like maybe Vernal, UT, or Grand Junction, CO.. Or Cedar City?

Last time this usurper went to Cedar City, some guy made a scene because my friend Albs didn't wash his hands in the bathroom. So from now on, I'm making it a point of not washing my hands in Cedar City (because fuck that guy).

We recorded a Ramones cover. I think we'll be releasing it on a flexi disc.

So fuck that. If you want it, email us and we'll send you the mp3.

We stuck our album on all the corporate music sites this weekend, but you can download it from here for free, so don't bother paying them for it.

If you want to make copies and give it away (or even sell it), go ahead. It saves us money, saves you money, and everyone wins.

We're going to post the album covers etc online so you can print your own sleeves and stuff.

We will be selling vinyl, tapes, etc soon, if that's more convenient for you.

(Or if you, like us, fetishize vinyl records, we will cater to those desires.)

Looking for shows in Idaho and Montana starting in March.

Scatter made this web site.